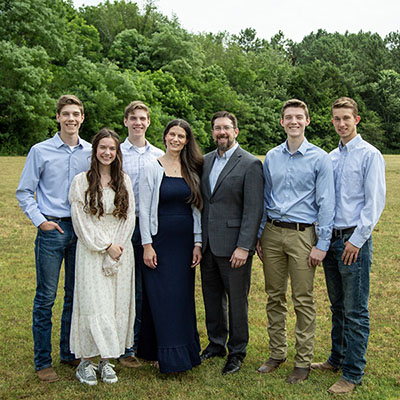 Jonathan and Sharon have been Grace Community Church missionaries since 2008. They previously served in Samara, Russia (2008–2014) where they were the final missionaries on the ground to witness the transition from a pastoral training ministry began by missionaries to a ministry now led solely by trained national leaders. The Moorheads are now serving in a similar capacity in the Czech Republic as Jonathan is an instructor at the Czech Bible Institute (CBI) and European Bible Training Center (EBTC). Jonathan’s primary role, however, is being a pastor at Křesťané Kuřim.

Jonathan has an M.Div. and Th.M. from The Master’s Seminary (2000, 2003), a PhD from Dallas Theological Seminary (2008), and is certified with the Association of Certified Biblical Counselors (ACBC). Sharon graduated from The Master’s University with a degree in flute performance (2000) and is also certified with ACBC. Sharon now serves in women’s ministry, music ministry, counseling, hospitality, and by homeschooling. Jonathan and Sharon have five children: Nahum, Isaac, Jesse, Jonas, and Miriam.

We seek to glorify the Triune God by evangelizing, discipling, training faithful men for ordination, and planting churches when there is a plurality of national pastors in each church (Acts 14:23).