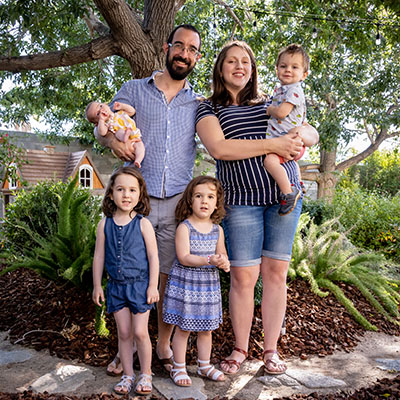 Cesare and Melissa were both born in Rome, Italy. When Cesare was 1-year-old his dad, Marco, and then his mom, Simona, were both saved, so Cesare was raised in a Christian family and was saved in his early childhood. Melissa was saved when she was 9, and though her family attended an evangelical church for many years, only her mom was saved.
As they grew up, both Cesare and Melissa experienced the negative influence of Catholicism in Rome as they were the only believers in their school. This experience opened their eyes for the first time to the extreme need of the gospel in Italy. Cesare and Melissa attended two different churches in Rome, but the Lord made their path cross in 2011. At that time they both had the desire to serve the Lord fully, and Cesare was planning to finish his undergrad studies and move to the States to attend The Master’s Seminary.
After 1 year of dating, Cesare and Melissa got engaged in 2013, and the following year Cesare moved to the States to start his theological training, while Melissa was finishing her study in the university of Rome. In 2016 they got married, and Melissa moved to the States with Cesare to support him in his studies. The Lord has blessed their marriage with three children: two girls, Michela and Elisa, and one boy, Gioele.
Cesare received his MDiv from The Master’s Seminary in 2018 and is currently pursuing the ThM in Old Testament, anticipating to finish it in 2021.
Cesare and Melissa are planning to go back to Italy in the summer of 2021 to serve the Lord in Rome, working with the Italian Theological Academy (TMAI center) and serving in a local church.

Cesare will be joining the ITA in Rome to serve as full-time faculty member alongside Johnny Gravino, director of ITA.
Besides regularly teaching, Cesare will be involved in standardizing the curriculum that are already offered by ITA, developing new ones, providing oversight over the ITA student body, and grading the students’ assignments.
Alongside his involvement with ITA, Cesare will be joining the Berean Church in Rome to attend with his family and to serve alongside the elders and pastoral leadership of the church through preaching/teaching, discipling/mentoring younger men, and serve the other couples of the church with Melissa.
If the Lord allows, after 3 or 4 years, Cesare and Melissa would like to start a church plant in Rome while continuing their ministry and partnership with ITA.