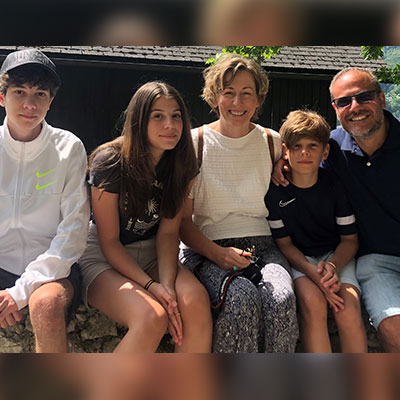 The Gravino’s and ITA’s decision to begin operating from Rome, Italy as of fall 2020. This means that both the Gravino family and ITA are relocating to Rome in order to begin pastoral training full-time from the most central location in Italy strategically speaking. Johnny will focus on teaching and more importantly reaching local churches in the city in order to develop a relational network among the churches in Rome. In addition, he will be traveling to the extension sites already present. The family will also minister at the Berean church of Rome (both Johnny and Alexandra’s home church that originally sent them out to TMS) while Johnny directs ITA.

The following is the story of God’s providential partnership between the Gravino family and the training ministry of Italian Theological Academy (ITA). Together both have served the Italian evangelical church in Italy for just over a decade through the distinct mission of theologically equipping both church and church leadership.

The Italian Theological Academy (ITA) is a pastoral-training ministry started in 2004 out of the need to introduce the Italian evangelical church in Italy to expository preaching. Central to ITA is the resolve to theologically train men (qualified/gifted and aspiring church leaders) “diligent to present themselves approved to God as a workman who does not need to be ashamed, accurately handling the word of truth” (2 Tim 2:15).

The Gravino’s joined ITA to serve full-time in the training of men for pastoral ministry (Johnny’s main role as a missionary to Italy) in the summer of 2009 after graduating from the Master’s Seminary (TMS) in 2008.

There followed years of growth in ministry and maturity serving both academically in the classroom teaching and pastorally in the local church preaching and shepherding.

Some of our ministry highlights:

The Bible Church of Messina will remain as a partner church for ITA training in southern Italy. The main location from which ITA will however minister will now be Rome. At the Bible church of Messina, Johnny will be replaced as pastor by Sebastian Mendez, trained by ITA. Two men, Sebastian, as well as Simone Marini, both serving at Messina Bible Church under Johnny’s pastoral leadership, now lead the church as new elders and pastors with Sebastian responsible for the preaching and teaching. The ITA deems Messina ITA fruit derived from faithful training over the years. The desire is to do the same in Rome.

The ITA finally will continue to host pastoral conferences and do publishing beyond its core equipping ministry in Italy, from the fall from Rome. Annually, it hosts a flagship conference for its men in training called “The Church” (a conference aimed at assisting church leaders in conforming to a more biblical philosophy of ministry in their own pastorates and local churches). ITA is also presently working to translate the entire MacArthur New Testament Commentary series into the Italian language and Biblical Doctrine.